Whose Choice? Plural Feminist Movements Packaged in and around Glamour

Recently, a video has gone viral again. This time it is caught in a triangle of consumerism, gender and change, and set off a debate on feminism, gender equality, class and empowerment. The advertisement “My Choice” selling the magazine and brand Vogue as well as the idea of empowerment was produced as a collaboration between director Homi Adajania and Indian actor Deepika Padukone. This advertisement is part of the social awareness initiative of Vogue India, #VogueEmpower. Deepika Padukone’s voice carries the message, based on a piece written by Indian screenwriter Kersi Khambatta, and begins with the words “My body, my mind, my choice”. The black-and-white film cuts between images of female faces and bodies of 99 people of different ages, religions and belonging, including film critics, directors, and other figures of the so-called ‘glamour’ industry, as well as Deepika Padukone herself. The lines address a wide range of topics relevant in feminist discourses, from body image, gender norms, sexuality, and reproductive rights, as well as love, romance and relationships. It ends with the statement “Vogue Empower. It starts with you”, which reflects the aim of the advertisement, to “encourage people to think, talk and act in ways big or small on issues pertaining to women’s empowerment. The message is simple: It starts with you” given on Vogue’s YouTube channel alongside the video.

The intentions, content and implementation of the message are currently discussed on social media and in various forms of national and international online press. Voices include private individuals, activists, journalists, representatives of right wing politics, and film celebrities.

Vogue Empower seems to convey the idea that it is up to each individual to engage, get involved on their own account but potentially also beyond, because it might “start with you” but where does it go after that? The understanding of empowerment, in particular, is now under grave scrutiny and criticised in various ways. The debate ranges from the question which ideas are valuable to address to what empowerment can be, and if this form can at all be a vehicle for empowerment. Deepika Padukone’s own perspective on empowerment is shared on Vogue’s YouTube Channel: “I’ve always been allowed to be who I want to be. When you’re not caged, when you don’t succumb to expectation, that’s when you’re empowered.”

Although some have supported the messages and see it as a celebration of women “not in a way that society expects them to be but in way of her being an individual, a separate entity, one who can make choices of her own and live life on her own terms.” (http://www.scoopwhoop.com/inothernews/celebrating-women/) and being truly feminist (http://www.thehindu.com/trending/deepika-padukone-in-my-choice-video-of-vogue/article7056615.ece), the debates that followed strongly questioned whether empowerment conveyed in the video was relevant or useful.

Several strands of critical voices point out that the issues addressed in the video only target a privileged minority of the population in India. Accordingly, the issues of clothing, bodily integrity and authority are a matter of personal choice and therefore would not qualify as topics of female empowerment (/http://timesofindia.indiatimes.com/entertainment/hindi/bollywood/MyChoice-Twitterati-cheer-for-Deepika/photostory/46753891.cms). This critique seems to create a division between one group of people, privileged and not in need of empowerment and another underprivileged group, who benefit from empowerment. The juxtaposition of personal choices is in many articles posed against issues of public concern such as female foeticide, abuse, access to education, domestic violence, rape, harassment at workplace, equal leadership opportunities, the pay gap, financial independence, the intrusive male gaze, and everyday sexism (http://www.thehindu.com/opinion/op-ed/wanted-less-style-more-substance/article7058383.ece). In this I see a certain hierarchical setup between issues that according to these critiques are worth addressing and issues that can be dismissed as privileged luxury problems.

Some of the critical stances seem to contradict each other. One on side, the dilemma of potential dangers or repercussions as unwanted consequences of the choices made beyond what is expected and set as the norm is considered. On the other side, this campaign is regarded for its potential harm is could do to the existing feminist movements. It is seen as a appropriating of women’s rights movements and branding feminism into a slick, cool and glamorous package instead of acknowledging the hard work that goes into it. In my opinion, one kind of struggle for feminist ideals is thereby romanticised while the other is thought of as easy. While surely the activism and work done in the history of women’s movements has not only been important but also dangerous and full of hardship, making the choices addressed in the video could also be a source of struggle.

Some articles debate the messages itself as hypocritical, in more than one way. According to this point of view, the choices “sold” in this ad stem from an industry riddled with stereotypical definitions of beauty and femininity thereby only supporting one kind of choice and freedom, one that fits within the frame of these definitions. Moreover, some saw the video as sexist in that the same demands of freedom to choose sexual partners “outside of marriage”, which was by many read as promotion of adultery, bigamy, and indifference, could not be claimed by the male part of the population. All these viewpoints illustrate that the video has definitely created a debate with diverse perspectives.

The debates continues to also inspire creative media output. While for example Amul, an Indian dairy cooperative based in Gujarat known for commenting on current popular, political, social and cultural events, incorporated the debate in its campaigning, by focusing on the divided opinions, others created responses delivering their own point of view: several examples of a male version of “My Choice” (here is one arguing that the Vogue ad is sexist : http://www.ndtv.com/offbeat/beer-belly-is-my-choice-spoof-of-deepika-padukones-vogue-video-751043), a dog version, and other spoofs e.g. incorporating the images of the “My Choice” video into other advertisements to highlight the sales of products over the social message (http://indianexpress.com/article/lifestyle/feelings/can-you-spot-the-hidden-ads-in-deepikas-mychoice-video/).

The reactions to the video must be said to be as diverse as the potential audiences, as the people voicing the critiques and reacting to the messages are all part of the audience (for another text on the critical viewpoints visit: http://kafila.org/2015/04/09/being-empowered-the-vogue-way-is-there-anything-left-to-be-said/). Each view contributes opinions, setting up a debate and potentially creates new perspectives in the feminist movement on gender equality, and what empowerment should mean. In light of this, the campaign has definitely proved successful in the goal to “encourage people to think, talk and act in ways big or small on issues pertaining to women’s empowerment”.

And I wonder, is being critical not also a sign of being privileged? There is a certain literacy that comes with the possibility of being part of the audience, first of all accessibility but also usage of a technical devices with a screen. Second, to be able to react to the issues mentioned in the short film one must not only understand the English language but also have an idea or understanding of empowerment as a concept, as well as being versed in debates on gender and the women’s rights movements. While for many the message of the “My Choice” advertisement is selling both a product and an idea, catering to a small group of people, is it not a crass assumption, that no one can be inspired by it in other ways than simply disagreeing? Sparking creativity beyond finding what is wrong with it, but potentially how it is relevant to some, affecting some part of their realities, or by simply inspiring some to get more information, and challenging some norms and expectations? Because, in the end, why is it a question of either or? And not a statement of all, everywhere, all the time? If the voices in reaction to this advertisement are diverse, why not also the possible impact? Debate being the source of movement and change.

See also: transgender-version of ‚My Choice‘

The Return of Feluda

Perhaps few other characters in Bengali fiction stir as much feelings in the young and the old alike as Feluda, the detective personality created by Satyajit Ray. Feluda who came to life through a story in a children’s magazine in 1965, ‘turns’ 50 this year. A documentary tells his story. Text: Indrani Dutta/Suvojit Bagchi 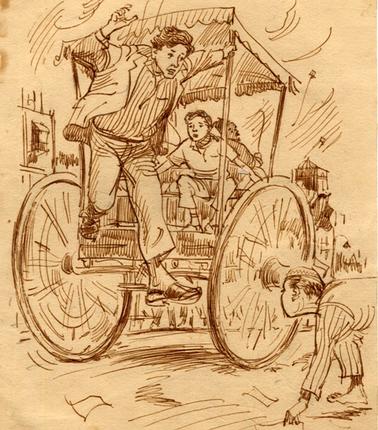 The first short story of Feluda, with sketches by Ray was published in 1965-66 in Sandesh, a children’s magazine. The maiden Feluda novella titled ’Badshahi Angti’ (The Emperor’s Ring) with more sketches by Ray appeared the same year. The magazine was launched in 1913 by Ray’s grandfather– writer, painter, printer Upendrakishore Raychowdhury. The editor’s mantle was donned later by Ray’s father, poet, illustrator and playwright, Sukumar Ray. (Courtesy: Ray Society)(Source: The Hindu, April 18)

Reader comment by Koel (The Hindu, April 20):
“Feluda – irreplaceable. I think he is the greatest tribute to the literary and intellectual middle class Bengali psyche”. 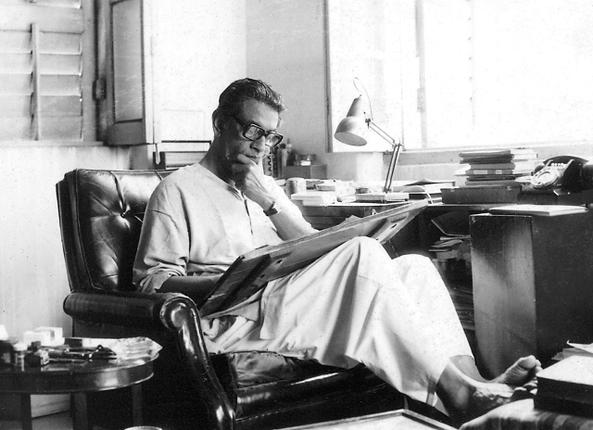 Writer and auteur, Satyajit Ray, created many of his characters sitting in this chair in central Kolkata’s Bishop Lefroy Road. One of his char-acters, Feluda, the quintessential Bengali gentleman sleuth, is com-pleting his golden jubilee later this year. (Courtesy: Ray Socie-ty)(Source: The Hindu, April 18)