The small Bangalore-based studio also produces a great variety of other media such as a film series about the feminist street-art collective ‚Fearless‚, which tackles conversations on gender and public space and several short films dealing with environmental issues.

For an interview with the artist read more at ‚Royal Rant‚, The Hindu. 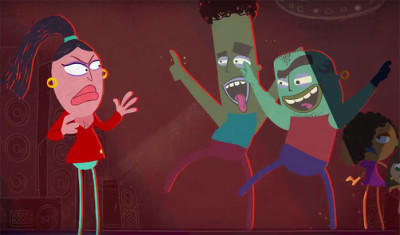 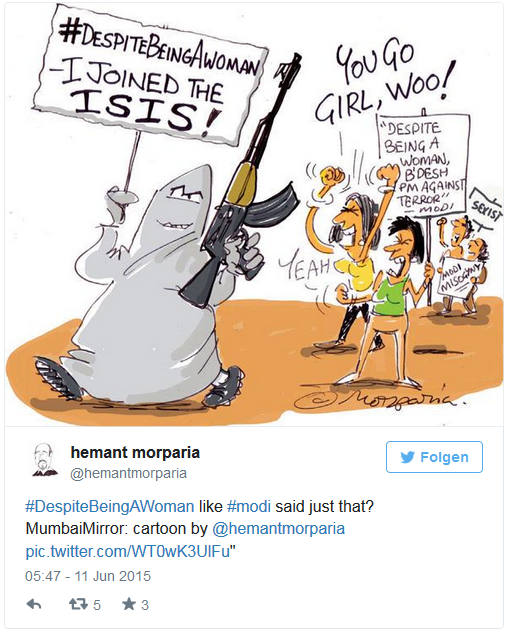 Image credit: Panel from ‘But What is Basic Space?’ by Kaveri Gopalakrishnan

“Drawing the Line: Indian Women Fight Back” is a collection of visual stories by 14 young women produced during a workshop organized by the Indian feminist publisher Zubaan and the Goethe Institut and held by Indian graphic artist Priya Kuriyan and Larissa Bertonasco and Ludmilla Bartscht, German co-editors of Spring Magazine. As a response to the public outrage and debates following the 2012 Delhi gang-rape case the artists visualize narratives of resistance, desire, anxieties and anger in regard to gendered norms and expectations which range from the voyeurism of rape reportages and the wish to loiter untroubled in public parks to female foeticide and stigmatisation regarding skin colour.

Lauded for its rich and diverse artistic expressions “Drawing the Line” includes stories which call forth solace and the celebration of female solidarity as well as chuckles of approval by the ”liberating portraiture of women’s so-called quotidian wants: Going nude, not dressing to impress, bra-less at work, scratch in public anywhere, spreading their legs when sitting”.

The anthology is, as workshop organizer Bartscht concludes, “… not about turning everything on its head or about fighting back using the same awful weapons” but instead about being “brave, strong, full of love and goodwill.”
As such represents “Drawing the Line” equally the assertion of young women artists in the male dominated sphere of the comic book genre and in the ongoing discourse on gendered safety and propriety in which the artists seek “to reclaim the narrative on their bodies, minds and lives.”

Manipur Masala – A Regional Film Industry Looks Beyond Its Borders

LATE THIS AUGUST, the Film Forum of Manipur made a bold announcement. The state’s apex industry guild and regulatory office, which ensures that all films abide by censorship rules imposed by local separatist groups, slapped six of the regional industry’s actors with a six-month ban. The punishment was meted out for failure to support protests for an “Inner Line Permit” system in Manipur. The ILP system, which requires outsiders to get special permits to visit a state, is in force in Nagaland, Sikkim and Arunachal Pradesh, where tribal populations see it as a protective membrane over local ways of life.

The actors, each of whom has about ten to twenty films in the pipeline, argued that they had never received a notice to attend the protests. The Film Forum’s Executive Council refused to accept the excuse. In early September, Laimayum Surjakanta Sharma, the Forum’s chairman, told me over the phone that the ban would hold, although actors were free to act in music videos. “We will see how much they support our campaigns in the near term,” Sharma said, hinting at the possibility of a commuted sentence. “We are giving them a lesson.”
– See more at: Manipur Masala

Shifting Urban Landscapes and the Politics of Spectacle

„As postcard images the new murals have contributed to the reinforcement of the iconic, standardized status of history, tradition, and the beauty of the State, but is not their repetition again creating indifference? I think we can be almost sure that after the newness of the mural form has worn off, the depicted scenes will return from their short-lived presence in hyperreality into the sphere of clichéd, everyday manifestations that are largely unnoticed. For the moment, the city authorities steadily continue to embellish even more public walls.“